Here is Ruvarashe Mukelabai playing a song she arranged herslef, Rhainna’s Diamonds.  Well done!  RuRu is taking a short break from piano to play volleyball but I hope she keeps playing and arranging music in her spare time.

Five students attended the UNCG July Piano camp, Ashley, Chelsea, Elijah, Myles and RuRu, and by all accounts had a wonderful time.  Chelsea also attended the UNC-Chapel Hill piano camp and thanks to Roger Daniel, her dad, you can see and hear her play Chopin’s Fantasie Impromptu. Congratulations Chelsea – so sad she is now off to Winston Salem to UNC School of the Arts but watch out for her name in lights one day – Chelsea Daniel!

This year students worked on “Character Matters 2”, a play about how even fairy tale characters need some help at times. This was the opening song “Math and Science” with the 15 campers doing a great job seeing they only had one week to learn the whole play and all seven songs!

Here is the Ukulele orchestra playing “Yellow Submarine” just before their concert on the last day of the camp. Considering each student had never played ukulele before and had just one week’s tuition, I think they did really well! 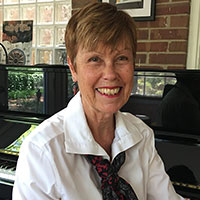